The Importance of Music in Early Childhood

Lili M. Levinowitz is a professor of music education at Rowan University of New Jersey, Glassboro. 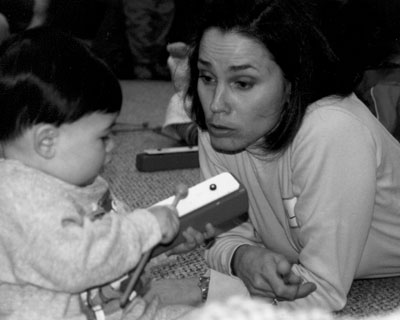 The media's popularization of findings from studies indicating a causal link between music training and spatial reasoning in young children (Rauscher et al. 1993, 1997) has caught the attention of many and spurred interest in the inclusion of music in early childhood education. Curriculum models that substantiate this point of view are credible; however, music educators need to remind decision makers about other valid reasons for teaching music in the early childhood curriculum. The purpose of this article is to survey some of the work in music education that validates the inclusion of music for its own sake in models for early childhood learning.

Making music is as much a basic life skill as walking or talking. Peery and Peery (1987) suggest that it is desirable for children to be exposed to, trained in, And enculturated with music for its own sake. That is, it is a birthright for all people to be able to sing in tune and march to a beat (Levinowitz and Guilmartin, 1989, 1992, 1996). To ensure a comprehensive learning experience, music must be included in early childhood. Practically speaking, the argument that music education is a frill finds no objective support.

The importance of music instruction for music development during the early years of childhood has been widely investigated since World War II. The Pillsbury studies (1937 - 1958) (Moorhead and Pond, 1977) provided the first glimpse into preschool children's musical lives and informed us about the nature of their spontaneous music behavior. Characteristic music performances of young children provide a window through which music psychologists and educators can understand the sequence of the child's developing music skills.

Generally, we have learned that children from birth to approximately age six do not express music like adults. Early childhood, a period of rapid change and development, is the most critical period in a child's musical growth and has been identified in the literature as the "music babble" stage (Moog, 1976; Gordon, 1988) or primary music development (Levinowitz and Guilmartin, 1989, 1992, 1996). Even the youngest infant is wired to receive music and discriminate among differences in frequency, melody, and stimuli (Bridger, 1961; Trehub et al, 1990; Standley and Madsen, 1990; Zentner and Kagan, 1996).

The years from birth through age six are critical for learning how to unscramble the aural images of music and to develop mental representations for organizing the music of the culture (Holahan, 1987; Davidson, 1985). This process is similar to that which unfolds for language during the "language babble" stage. The body of knowledge acquired through research thus far supports the notion that, like language development, young children develop musically through a predictable sequence to basic music competence, which includes singing in tune and marching to a beat (Levinowitz and Guilmartin, 1989, 1992, 1996). Consider this analogy; in cable television, visual images are readily available for any channel; however, to see them you need a cable box to unscramble the images. During primary music development, children create a "box" or mental representation to unscramble the aural images of music. This multifaceted, complex mental representation is known is "audiation". Audiation is paramount in importance because it is basic to all types of musical thinking. Without audiation, no musical growth can take place.

Early childhood is also the time when children learn about their world primarily through the magical process of play. The substance of play in very young children is usually comprised of the environmental objects and experiences to which they have been exposed. If the music environment is sufficiently rich, there will be a continuous and ever richer spiral of exposure to new musical elements followed by the child's playful experimentation with these elements.

Edwin Gordon has identified early childhood as the period of developmental music aptitude (1988). During these years, music potential or aptitude, which is based on the complex construct of audiation, is in a state of change. Because of this state of change, the child's musical aptitude is vulnerable to positive or negative influences through both instruction and environment. Without sufficient stimulation and exposure, a child has little with which to experiment and learn through his or her musical play. The most typical negative influence on developmental music aptitude is simply neglect. Hence, the inborn potential for musical growth may actually atrophy.

The research conducted by Geringer (1983) and Apfelsradt 1984) suggests that understanding the culture's music and the ability to perform accurately are not necessarily related. Being able to perform music accurately may be attributed to two factors. The first is audiation, which involves acquisition of sound and the processing of it. The other is the performer's technical acquaintance with his or her singing and movement "instruments," which are largely kinesthetic (Weikart, 1987; Bertaux, 1989). Therefore, in addition to developing the mental representation or audiation of music, the early childhood years are also critical for developing the ability to engage in music through singing and moving.

Our profession has frequently studied vocal development. From that work, we have come to understand that using the singing voice is a learned, complex skill (Phillips, 1992). To be developed properly, it must begin in the early childhood years. If singing is not properly developed, the ability to perform music vocally will not coincide with the ability to think tonally. The vocal range is remarkably wide from birth. Infants can imitate and experiment with their vocal instruments: and even match pitch as early as three to four months of age. Purposeful singing can begin at around twelve months. At this time, adults can recognize snippets of songs to which youngsters have been exposed. Through continued exposure to spoken chant, songs, and vocal play, young children can develop the use of their singing voices during the remaining early childhood years.

If the environment has supported vocal development, most children will enter kindergarten with some use of their singing voices. Unfortunately, a recent study (Levinowitz et al. 1998) shows a decrease in students' skill in using their singing voices over the past two decades. In fact, less than half of kindergarten-age children were able to differentiate between their singing and speaking voices when performing a familiar song. It seems that this may be the result of missing the key time to develop the singing voice during early childhood through playful activities and thoughtful adult guidance.

Both contemporary research and the traditions of many cultures have demonstrated a profound connection between rhythm and movement. The study of rhythm can be thought of as the study of all aspects of flow of music through time. We experience rhythm as the flow of our movement through space. From the developmental perspective, children must experience rhythm in their bodies before they can successfully audiate rhythm in their minds. The early childhood years are crucial for using the body to respond as a musical instrument in many ways to many different kinds of music. Real musical instruments, like tools, can then become simply extensions or amplifications of the body's ability to be musically expressive.

Phyliss Weikart, a pioneer in movement pedagogy, has noted that many school-age children cannot walk to the beat of music, perform simple motor patterns, or label how their bodies have moved (1987). She suggests that children can gain this experience in naturally occurring situations during infancy and early childhood, especially if adults recognize the importance of early gross motor development and of language interaction about rhythm and movement with young children. Furthermore, other motor theorists' research supports the importance of movement in early childhood. They have found that most fundamental motor patterns emerge before the age of five and are merely stabilized beyond that age (Gilbert, 1979).

Parents, care givers, and teachers can do a great deal to provide the necessary stimulation through music experiences to nurture the young child's music abilities. In fact, the importance of environmental factors in music development is supported by the case studies undertaken by Kelley and Sutton-Smith (1987). They studied three first-born females from their births to two years later who were reared in families with three contrasting musical backgrounds. One set of parents was professional musicians, another set was musically oriented but not practicing professional musicians, and the third set was not musically oriented - and hence made fewer musical choices in their child-rearing practices. The differences between the family that was not musically oriented and the other two families were startling in that the two children who experienced richer musical environments were considerably more developed in their music behaviors.

Teachers and researchers have gleaned information from their professional experience suggesting that early childhood development in general and successful educational programs in particular can be attributed to the partnership between the young child and his or her significant others. Similarly, it seems that this philosophy could be applied practically to early childhood music education. Forming collaborations among the adults who care for our nation's youngest children and understanding the learning processes specific to early childhood will foster music abilities and contribute significantly to the overall growth and development of the child.

Bertaux, B. "Teaching Children of All Ages to Use the Singing Voice, and How to Work with Out of Tune Singers." in Readings in Music Learning Theory, edited by D.L. Walters and C.C. Taggart, 92-104. Chicago: G.I.A., 1989.

Geringer, J.M. "The Relationship of Pitch-matching and Pitch Discrimination Abilities of Preschool and Fourth-grade Students." Journal of Research in Music Education, 31:2 (1983): 93-100.

Greenberg, M. "The Development and Evaluation of a Preschool Music Curriculum for Preschool and Headstart Children." Psychology of Music, 2:1 (1974): 34-38.

"The Effects of Music Education Based on Kodaly's Directives in Nursery School Children from a Psychologist's Point of View." Psychology of Music [ISME IX Research Seminar], 1982.

© 1998 by MENC: The National Association for Music Education. Reprinted with permission and the understanding that appearance on this website does not imply endorsement.