Including More Voices: Building a Diverse and Respectful Music Curriculum

It’s the 1980s. Ken Guilmartin and Dr. Lili Levinowitz are pioneering a new way of teaching music to young children: play-based music classes where everyone sings, dances, and plays together. Until now, music used in early childhood programs has been limited to simple children’s songs (think "Wheels on the Bus") or Eurocentric classical works (think "Peter and the Wolf"). Ken and Lili have what’s considered an innovative idea: include songs in the Music Together® curriculum that reflect the diverse sounds of the world—from styles such as jazz and blues, to music from countries such as Greece and Korea, to languages like Spanish and Hebrew.

The resulting collection included 200+ songs from cultures near and far, in a wide range of tonalities, meters, and musical styles. Ken and Lili recognized how important this variety is for children’s music development—and how it builds global connections through music.

Evolving with the Times

As the 1980s became the 2000s and beyond, Music Together has grown to reach thousands of communities around the world. And something else has evolved over these past three decades: our understanding of how best to represent the diversity of the world, including through music.

The times now call for a deeper examination and evaluation of song material, especially given that, today, we have resources for research that Ken and Lili could not have imagined when they made their careful selections.

So, in 2018, the decision was made to evaluate all Music Together songs, and the Song Advisory Board was formed to provide independent review and counsel on song choice to Music Together leadership. Board members are ethnomusicologists, music educators, music historians, and culture-bearers. Their expertise allows them to do a deep-dive into the origin, history, and usage of the Music Together songs they have been asked to research. Our goal is to eventually have the Board review all adapted and original material, and then periodically re-review as new information becomes available.

Music Together Worldwide CEO Susan Darrow reflects, “What’s become clear to me through this process is that very few generalizations can be made. It’s necessary to look at each song really carefully, and make decisions on an individual basis, which is why the research that the Board does is so important. To me, the complexity shows how essential it is to do the work.”

From Recommendation to Action

The Song Advisory Board provides the research and context to Music Together leadership, who then make the final decision regarding each evaluated song. Sometimes it is a clear choice: the one rule established early on was that songs that oppress others would be removed. More often than not, a song’s history is more complex than you might think. Here are two examples.

Many pieces of music were created for or included in minstrel shows to reinforce and perpetuate stereotypes and oppression. These songs, which were typically catchy and easy to sing, often made their way into homes, communities, and classrooms. "Jim Along Josie" is one of those songs, and it has been sung in elementary schools, by children’s choruses, and on "kiddie music" recordings for decades. However, songs that were created and used in a context of oppression do not belong in young children’s music. "Jim Along Josie" has been removed from the Music Together curriculum.

In the case of "Skip to My Lou," we were concerned that one verse might be racially charged and potentially offensive. We asked the Song Advisory Board to investigate and found something surprising: The phrase "flies in the buttermilk" was not used to denote race until the 1960s, when James Baldwin used the expression in his essay, "A Fly in the Buttermilk" (1961) and Malcolm X used it in his 1965 autobiography. At this point, the phrase became more widely used to point out racism and oppression in the United States.

One hundred or so years earlier, “Skip to My Lou” was a popular "play-party song" in Midwestern North America. Like many other songs, the origins of "Skip to My Lou" are likely rooted in English or Scottish folksongs brought to North America by early settlers. Lyric variations such as "cat’s in the buttermilk…," "mice in the cream jar…," "had a glass of buttermilk…," etc. seem to be indicative of nineteenth-century farm life in Midwestern North America—and flies landing in a jar of buttermilk was likely thoroughly vexing!

Because all known information on the song’s origin and usage indicate that it was a true play-party song, and the "flies in the buttermilk" phrase was used in that context (and not as derogatory or demeaning), the Board agreed that "Skip to My Lou" continues to be an appropriate choice.

We did make one change to our version of the song: to remove the phrase "flies in the buttermilk." While its origins and usage in "Skip to My Lou" is not problematic, its re-characterization in the 1960s gave the phrase new meaning, and we decided that the song stayed true to its roots without it. 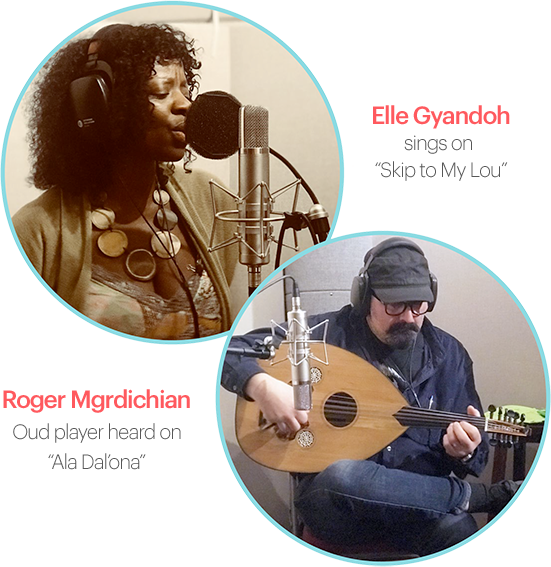 Putting the theory into practice—"walking the walk"— has meant a shift in our musical arrangements and recordings, too. "Once we know a song in question has been approved to stay in the curriculum," says Deanna deCampos, Director of Curriculum Development and Educational Services, "we listen carefully to the song track and ask, 'How can we make it better? How can we re-envision or add new artists to better represent a more diverse, inclusive, community of voices?" We understand that representation matters. Families listening to and singing along with our songs benefit from hearing as diverse a group of singers as possible.

Whether arranging and recording a new song or re-engineering a song currently in the Music Together curriculum, our composers, producers, and sound engineers work with artists and musicians from around the world to ensure that our recordings are authentic to each song’s origins. In some cases, this means re-mastering an existing song by replacing one or two vocal or instrumental tracks, and in other cases it means starting from scratch. The decision points are numerous: which recording tracks to keep, which tracks to re-record, which versions of centuries-old folksongs to choose, which vocalists or instrumentalists to hire, and so on. "The end result is worth it," says Deanna. "We are expanding the Music Together vocal 'family,' which is now a multi-racial, multi-ethnic, multi-gender, multi-age community of music-makers—just like the families who sing and dance in Music Together classes around the world."

Adding New Songs from around the Globe

"When a space opens in the Music Together curriculum, it’s an exciting moment," continues Deanna. "The world is filled with incredible music that we can explore adding to our collections. That’s a true silver lining!"

Each song under consideration goes through the same intense scrutiny as the music currently in the curriculum, and many don’t make the cut. But when they do, we end up with folksongs like "Ayiko, Ayiko" (from Ghana) and "Ala Dal’ona" (from Lebanon), featuring vocalists and instrumentalists who are culture-bearers in alignment with each song’s origin.

Advanced recording and file-sharing technologies now mean that we can record a singer or a doumbek player halfway around the world and include them in the Music Together musical "family," thereby increasing children’s exposure to authentic music and enriching the curriculum.

Music educators across the field, from early childhood music teachers on up to top ethnomusicologists, are grappling with which songs to teach and how to teach them. Many music teachers are rising to the occasion, forming grassroots groups online and pooling their knowledge, in an effort to do what is being called "de-colonizing music education." However, we need a fundamental shift in how teachers are taught to select music and explore it in the classroom.

Susan explains, "Many of the songs that music educators were taught to sing to their students are now problematic, and the resources for new songs aren’t there for them. That’s one of the reasons I’m excited to be working with the Early Childhood Music and Movement Association (ECMMA)."

ECMMA asked Susan to be a part of their Diversity, Equity, and Inclusion Committee to develop resources for music educators, and she will be sharing Music Together’s experience with the Song Advisory Board and the resulting decisions at their annual conference this summer. She will also describe Music Together’s immersive approach to music teaching, which continues to be groundbreaking in the field of early childhood music education.

"One of the fundamentals is how we teach music to young children," Susan continues. "There is still a tendency to teach them formally, through notes. What we don’t do naturally is to teach them first to speak the language of music, like many cultures outside of the European tradition do. That’s, of course, what we’ve always done at Music Together, since we know that young children learn best through play with the grownups they love. We’re so glad that it’s now being recognized as a good thing to do!"

We are proud to have been pioneers in music education since our start, and we hope that our efforts to de-colonize our curriculum continue to inspire other music educators to shift how they think about choosing and teaching music. As more of us do this work, children will develop a repertoire of high-quality, oppression-free music they can share for generations to come.

Susan’s advice for anyone looking to get started? "Listen and learn from others, especially culture-bearers, and take the time to do the hard, but critical, work of challenging what you think you know. The end result will be worth it."