Ken Guilmartin conceived and led the development of the innovative Music Together® early childhood music and movement program for the Center for Music and Young Children, which he founded in 1985. Active as a composer, author, teacher and trainer, be is a leading advocate of developmentally appropriate practice and adult inclusion in early childhood music. 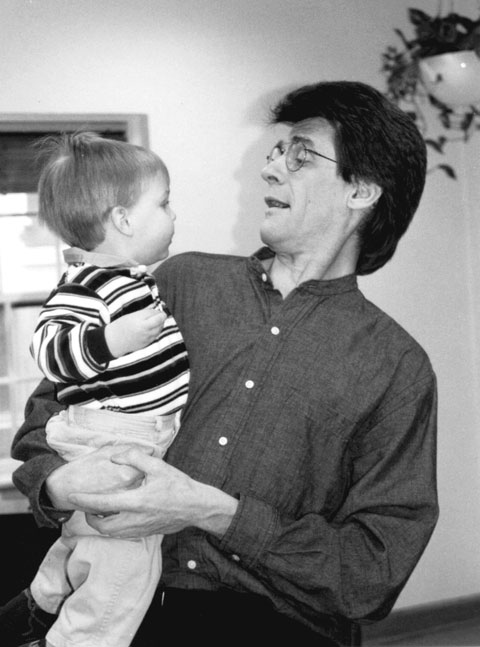 What an exciting end of the century it has been for early childhood music, and what promise there is for the future! Making music is becoming a family pastime again for tens of thousands of families. Moms and dads are singing in the car and dancing in the living room, setting the model for their little ones that music can actually be made, not just consumed from the media. Other primary caregivers like grandparents, nannies and preschool teachers are joining in the fun. And babies, toddlers and preschoolers are simply delighted with all this activity. They enjoy observing, listening and then informally playing with the tonal and rhythmic expressions modeled by their elders, while simultaneously growing their limbs and multiplying their neurons. In this way they learn to assimilate and express the music of their culture, driven by that ancient alliance, now rediscovered, between the miracle of development and the miracle of music.

Some will say, "Of course little kids like music—what's so extraordinary about that?" or "What can you teach a toddler about music anyway?" Others will wonder what relevance early childhood music has to serious instrumental study. Let's answer these questions from the perspective of the future.

Where is all this activity going? My millennial vision for early childhood music has three parts:

Part I: The restoration of the natural human ability to "speak" the language of music by age 3 or 4. In practical terms, this means children can audiate, or understand and process, tonality and meter, demonstrated by the ability to sing in tune and sing or move with accurate rhythm. Acquiring these skills is not a matter of "talent"—all normal children can do so if conditions are right, just like they acquire the ability to speak their native language in a basically competent way.

Part II: The restoration of the natural human disposition to participate in music. In our ecstatic embrace of performance culture, amplified by the technological wonders of the media that transmit these performances, we somehow have lost the inclination to make music ourselves. The result is that most very young children—babies, toddlers and preschoolers—do not experience their adult models actually making music. Instead, they experience us consuming it from the media. Naturally, children grow up having learned to consume it also.

A corollary to this vision is that more and more children and adults will learn how to use the powers of technology actively to enhance their experience and expression of music, rather than making passive listening their sole source of musical experience.

Part III: The evolution of our full capacity to use music for personal expression, development and transformation. Whether you believe Mozart makes you smarter and has the power to heal or is just beautiful, relaxing or fun, the growing consensus is music can be good for you. But we miss the point—and the power—when we just listen to it, as if taking our vitamins. The power is in the doing of music. "Doing" can be as simple as a sing-along, dance-along or play-along activity. But if you do not/cannot/will not do it, you miss the major benefit. As Parts I and II are realized, many more children—and therefore adults—will be able to take advantage of the new millennium's discoveries in the frontier of the developmental, transformational and healing powers of music.

Why do I say "restoration?" Because the inability to achieve the basic music competence indicated in Part I appears to be a condition of modern media civilization. In contrast, a basic assumption in many indigenous cultures is that everyone can sing and dance—and they do. That's what is extraordinary about the growth of early childhood music—it will be, I believe, the major contributor to restoring basic music competence in the general public.

What relevance does this have for instrumental teachers of older children? Our observations at the Center for Music and Young Children over the last fifteen years indicate that most American children without good development in early childhood cannot sing in tune or accurately express rhythm until they are age 5 or 6, even though they have the potential to do this by age 3 or 4. Far too many still cannot at age 8 or 9. This leads us to believe that the majority of five- to eight-year-old American children are developmentally delayed in music from two to five years. No wonder many of us teaching lessons have a feeling gnawing at us deep down that it ought to be easier. Not that children should not learn to work hard and achieve ambitious results—it just seems so often to be unnecessarily hard.

No wonder many of us teaching lessons have a feeling knawing at us deep down that it ought to be easier. Not that children should not learn to work hard and achieve ambitious results—it just seems so often to be unnecessarily hard. No wonder the wonderful approaches of Dalcroze, Orff, Kodaly and Suzuki have unexpectedly mixed results with many younger children. These approaches were created for children who had already achieved basic music competence on their mother's or grandmother's knee. No wonder piano lessons and school music can be frustrating and difficult for so many children—and teachers and parents. Rather than learning, with an acceptable amount of effort, a new application—reading, writing, instrumental technique—of what you already know how to "speak" and understand, children get lost in a labyrinth of methods, styles and techniques that try to compensate for their developmental delay. For many, music is just "hard" or "no fun." For many others, it is a highly specialized skill, supported by highly organized rituals to render a limited number of "pieces" presentable to various kinds of audiences. Yet because these children have not learned to improvise or sight read, they still cannot enjoy simply playing their instruments.

As the vision I have described evolves, how much easier it will be to teach piano without having first to teach Music. And you will be supported in your efforts by the more actively musical parent of the new millennium who will have as much understanding of music development as he or she currently does of emotional, social and physical development.

It is not out of the question that, sometime in the future, music development may actually run parallel to language development. Children will improvise song as fluently as they talk - the improvisation of language—at age 3. At ages 4 or 5, if parents have "read" to them music as well as bedtime stories, many will get the idea that the page "talks" and actually begin reading scores. And elementary school chil-dren will be composing and notating scores as fluently as they currently create and write their own stories.

In the shorter run, the growth in early childhood music will bring such changes as:

And so, a prediction: In the millennium past, especially in Western media culture, "doing" music was increasingly based on performance aesthetics, philosophies, traditions and rituals. In this new millennium we will see a return to balance created by the reawakening, rediscovery and creation of aesthetics, philosophies, traditions and rituals that support participation. Stimulated by the music making of their parents and caregivers, children will be able to develop the basic music competence that is their birthright. Guided by skilled and joyful early childhood music practitioners, the musically active family will be at the heart of this renaissance.