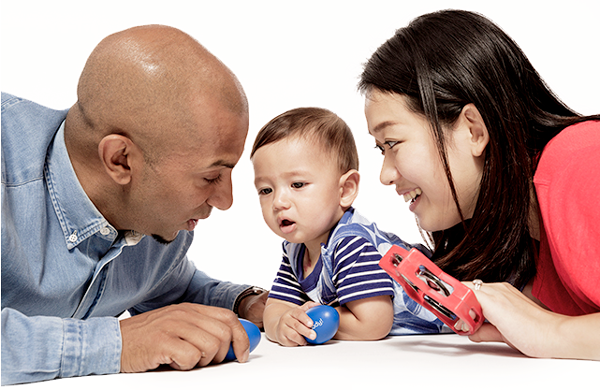 Babies noisily make their grand entrances into this world. At first, all of those cries might not sound like music, but they’re really the first signs of a baby’s innate musicality. Just as they have to babble to develop language, babies have to “babble” in music to learn to sing. Little ones are born with a natural capacity to make music, whether they’re cooing, squealing, crying, or, eventually, giggling and babbling.

Just as we are born with this potential to make music, we’re also wired to receive music. Studies have shown that even the youngest babies can respond to changes in tempo, distinguish differences in volume and melody, and sense when a song is about to end. It’s in these instances that we can see with our very own eyes our children’s ability to hear, respond, and react to music—even when they’re just a few days old.

When a song starts, a baby’s movement often changes with it. They might start moving with the melody, or they might become still, almost as if they’re listening to the tune. When the song stops, the baby’s movement pattern may change in response. Sometimes a baby will even react this way when asleep—as a song changes, they’ll “startle,” their little hands and feet moving involuntarily.

As time goes on, our little one’s responses to music become more voluntary and organized. When you dance with your baby, swaying to the tune or marching to the beat, you’re helping them build a “body memory.” Eventually, they’ll be able to recall that movement in time and respond on their own to the music. Slowly but surely, their movements will start to align with the beat that they’re hearing.

Sometimes it’s hard to recognize music behavior in very young babies. After all, they sure don’t sing like we do! The responses below are common ways babies react to music. When you see them in action, it’s a chance for you to play with your baby in a musical way.

So, if your baby is cooing, coo back in the same pitch. If they’re tapping on his high chair, tap a steady beat back. Engaging with your baby this way will do more than just create a bonding experience. It will reinforce that making these types of noises is more than just play: There’s serious music-learning happening in all that silliness!

Your baby is ready to make music with you, so come join us and we’ll make Music Together!