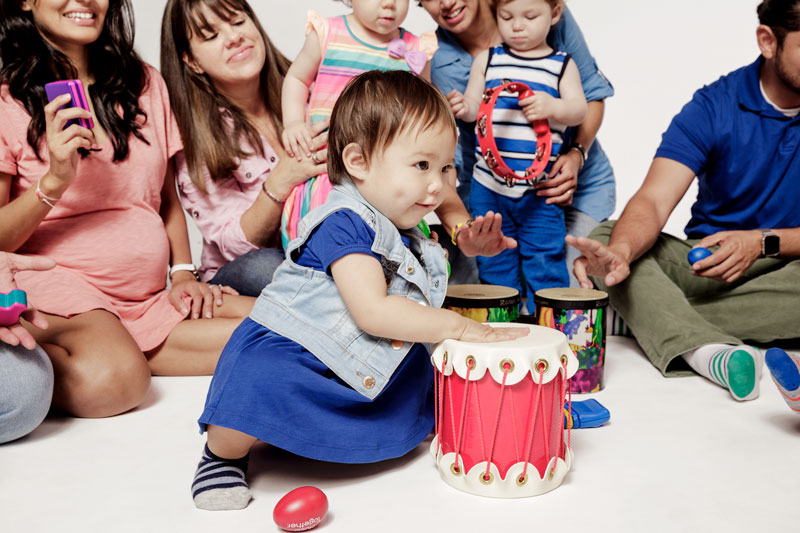 These are just a few ways to say “Hello, Everybody,” the phrase that opens every Music Together class. From the “Hello Song” to “Goodbye, So Long, Farewell,” families and teachers all over the world are connected through song and a shared love of music- making.

When families have to relocate, the familiarity of Music Together songs, rituals, and activities comes in handy. Attending class in their new neighborhood can be a huge help to children (and grownups!) adjusting to new landscapes, cultures, or languages.

The Coyle family had just this experience. When son Brady was an infant, the Coyles lived in Zurich Switzerland, where they took Music Together for almost three years. When they moved to New Jersey, they found a Music Together center near their new home and were able to slide right back into class without missing a beat (pun intended). According to Brady’s mom, Rebecca, the continuity of their Music Together class and the instant community she found there were immensely valuable in making Brady—and the whole family—feel more at home. “Keeping Music Together in his life,” she said, “helped him to integrate into his new environment.”

The Coyles are not alone! Families often tell us that looking for Music Together is one of the first things they do when they move to a new area, or even a new country. Just ask Amy (Bunny) Chen, a teacher and center director in Taipei, Taiwan. This summer, Bunny and her family were visiting the States on vacation, so she taught a 3-week mini-session of Music Together in Rowena Morgan’s center in San Francisco, California. Bunny said that one of the families “used to take classes at my center in Taipei, and they only just moved to the States. By coming to my class, they felt very comforted.”

Even cross-cultural vacations can benefit from the worldwide reach of Music Together. A New York family of Indian descent recently visited cousins in India—and attended a Music Together class with them during their stay. “They were singing the same songs we were singing,” the mom said, “so we were able to join in right away!” That little taste of home helped ground her, and she and her family almost immediately bonded with a warm, enthusiastic group of fellow music-makers.

You might think that speaking a different language would be a barrier in cross-cultural Music Together exchanges, but happily, music transcends these limitations. For one thing, songs without words in English are still songs without words in any language. For another, it’s always about the music! In her San Francisco classes, Bunny supplemented the English-language songs and chants with songs and phrases in Mandarin, and everyone was still able to participate. According to Rowena, “Some Mandarin elements included dancing to a Taiwanese pop song for free dance or listening to a beautiful lullaby in Mandarin—and neither of those elements in class needs translation!”

Other Music Together teachers around the world have swapped centers, too. New York teacher Terri Gabriel once taught Jade Jossen’s classes in Bologna, Italy, for a week while Jade taught Terri’s classes in Manhattan. Terri, who speaks only English, was worried about communicating with the families, but the hugs from the children and ‘grazies’ from the adults told her that the music said everything she wanted to say. “It doesn’t matter what language you speak,” Terri said. “All of us can think, all of us can love, and all of us can ‘music.'”

New friends Bunny and Rowena second that emotion, thrilled to have made a lasting connection with each other and with new families by making music together. Even in the absence of a shared language, music has the power to establish community. When you “music,” as Terri put it, all that matters is the moment you create together. From Bunny and Rowena, to Terri and Jade, to the countless families singing “Hello, everybody!” in New York, Zurich, Mumbai, and all over the world, we are all connected through the universal language of music.